The plight of email

A couple of weeks ago I talked about some of the changes I was making in my life so that I could become more effective both at work, and in my personal life. I've significantly reduce the number of meetings that I go to, I've been at inbox-zero for weeks, and I've been extremely productive. I had an endless list of priorities that I've put a significant dent into including an 80 hour project, a 50 hour project, and a 30 hour project (don't quote me on those exact number, just know they are close), all while working less hours. I'm still less productive while in the office because there are distractions I simply cannot avoid (like the cubicle assassins) but overall things have been great."

A couple of weeks ago I talked about some of the changes I was making in my life so that I could become more effective both at work, and in my personal life. I’ve significantly reduce the number of meetings that I go to, I’ve been at inbox-zero for weeks, and I’ve been extremely productive. I had an endless list of priorities that I’ve put a significant dent into including an 80 hour project, a 50 hour project, and a 30 hour project (don’t quote me on those exact number, just know they are close), all while working less hours. I’m still less productive while in the office because there are distractions I simply cannot avoid (like the cubicle assassins) but overall things have been great.

One of the things that I struggled with internally was the perception of responsiveness. Even though I had an epiphany about what being responsive really meant, I was concerned that the status quo I had built for myself was going to cause tension and or conflict. A couple of situations happened over the past week that helped reinforce the conclusion I made that responsiveness did not mean responding to email as fast as possible. Two bugs appeared in two different software applications and I subsequently received emails that had the word ASAP in it somewhere. Sticking to my twice daily email rule, I was able to escalate both problems, one I fixed myself same day, and the other I had escalated to someone who could fix it. Both email senders received a response from me same day stating that the bugs had been resolved. That IS responsiveness.

While everything in my life is improving as a result of the changes that I recently made, there is still one gap that I want to fix. Email…

I’m up to 43 filters now and my inbox is healthy. I’m able to work my email, twice a day, and as a result I stay at inbox zero during the week. The problem is that I’m still working too much email. The email that I’m still processing can’t be filtered by the built-in outlook filter. It’s context sensitive and requires at least a glance if nothing more. How can you filter email that you just need to glance at? Well… This is where the Gmail Priority Inbox comes in handy. Using smart technology it processes email for you, making sure that the highest priority emails sit at the top of your inbox. I keep hearing that we are moving to the Google App Engine which will give us Gmail and thus the priority inbox. My goal, once I have the priority inbox for work email, is to continue processing email twice per day, but only my priority inbox. I’ll defer the at-a-glace stuff to Google so that all I have to worry about is a very small number of emails to read twice per day.

What about the other emails that get marked as low priority? Simple. I’ll start out by reviewing those emails every other day until I feel comfortable enough that the priority inbox understands me. After that I think that once or twice per week for non priority email will be sufficient. The trick is coaching the priority inbox. Naturally, it should put email from important people at the top of the list, but only in certain situations. For example, if the sender is important and send something directly to me, that should be at the top. However, if that same sender sends an email to me and a group of other people, the first email should probably hit the priority inbox, but any subsequent emails (at this point the email is a chain and is starting to become spammy) should be at the bottom of the priority inbox, if in the priority inbox at all. The To, Cc, and Bcc should weigh-in on the priority algorithm, making sure that Cc email from important people have less of a priority than To email.

##Get to the point already…

The point of the priority inbox, and why I crave it so much, is to eliminate emails like the one below from my main view: 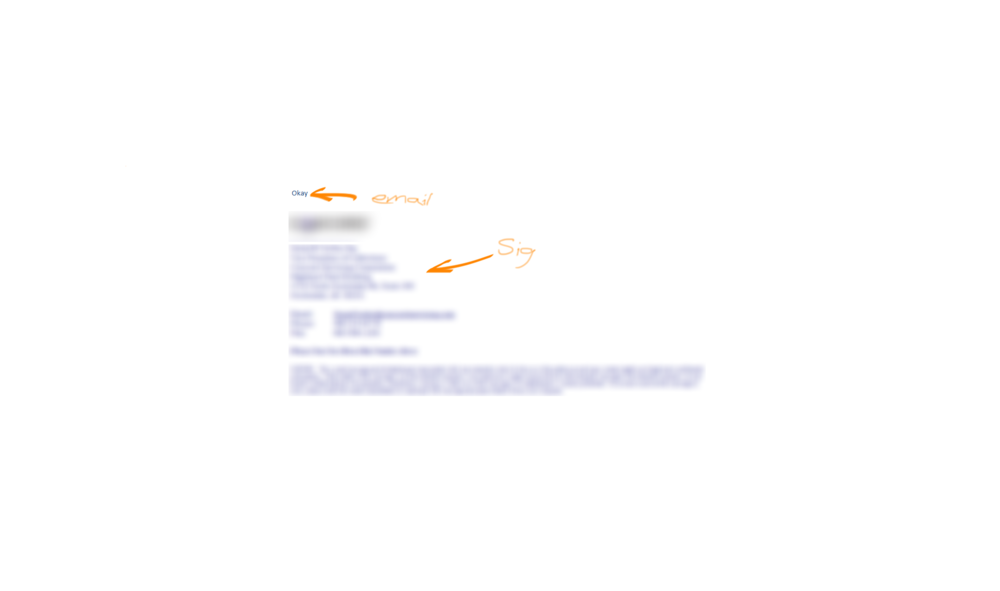 The email has a couple of problems with it, namely the signature, that makes it distracting to me. It violates Scott Hanselman’s email signature etiquette. He links to a post from Adam Cogan who listed some suggestions for email signatures:

This email has a very short body and a massive signature. I’m not a big fan of massive email signatures, specifically the ones with the legal language in it. Why am I bagging on the legal language? Simple. It applies, but it is not applicable to me in this email in this context. Did that make sense? What I mean is that if the legal stuff is required, by all means send it out. On your first email that starts a conversation… After that, keep it simple. If you ever get a lunch invite and the email has a massive signature, please tease the person until they change it.

So in this email example, I want to kill the noise by moving it to the bottom of the priority inbox. I think this will be a challenge for the priority inbox. This email if from an important person who’s emails I do want to see because well, they are important. Usually. I’m sure the Google gods will figure this one out. It might not be that difficult. The email should start with a high weight because the person is very important. Its priority should be lowered once it detects that the email is not directly to me, but Cc’d to me. It should then detect a very short email body and lower the priority even further. Perhaps Google will be kind and let me throw in an email signature ranking as well. ;)

So the point is to have a fluid email inbox. When you go to process your inbox, you will be most effective when the only email you process requires a next action.

By the way, here is my email signature. It is a hybrid between Tim Heuer & Scott hanselman and uses my Gravatar (no wasteful storage on our servers) to show my ugly mug: